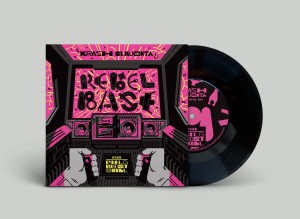 With less notice than a surprise Imperial attack, news of a new Krash Slaughta vinyl 7″ has arrived in the monkey’s inbox and it’s hotter than the barrel of an ion cannon 5 minutes into a major combat situation. The 45 in question is Rebel Base, Admiral Slaughta’s secret new dance-floor weapon and evidence of an alliance with mic pirate Phill Most Chill – a man famed throughout the galaxy for his light-speed flows. With beats edging past the 130 bpm mark and insane scratching, this one will have b-boys and girls amped to do the Kessel Run in fewer than twelve parsecs – even without a ship capable of jumping into hyperspace. What else do you need to know? Well, firstly, the flipside features Krash’s own remix with added Sith Lord intro. Then there’s the fact that with a name like Rebel Base it would be rude not to do a limited 300-pressing run featuring cover art pastiching the classic Kenner Star Wars figure blister packs with a ‘Hoth Blizzard’ splatter-pattern vinyl. If you want that though, you’ll have to leave on the nearest transport now. If your movements are delayed because you’re fighting a rearguard action against Imperial troops or something, hope still exists in the form of the standard black vinyl version in a sleeve featuring an attractive black and pink design. What’s that? Imperial troops have entered the base and the last transport just left?! Where’s the ‘Falcon?

Matt says: Mega old-school styled B-boy business for the festivals and open air get togethers. Phill Most Chill's deadly quick vocal gets an airing on two separate, highly danceable beats which'll have you grasping for the spray cans and boombox!