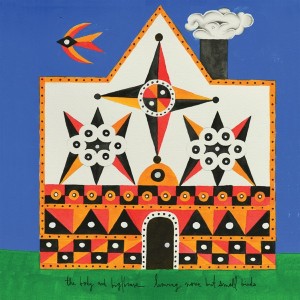 The Body and BIG|BRAVE are both bands possessed with an unequalled ability to convey overwhelming weight with simplicity, repetition and detailed sonic atmospheres; artists who continue to alter the definition of what it means to be a heavy band.

The Body are consistently prolific while increasingly ambitious as untethered producers and collaborators. BIG|BRAVE shape sound with dense waves of guitar and feedback, minimalist and hypnotic crashes and emotionally exacting vocal melodies. In collaboration, The Body and BIG|BRAVE shift the gravity of their compositions to woven layers of percussion and unspooling guitars that sprawl through stark frameworks of earthy folk.

Their debut collaborative album, ‘Leaving None But Small Birds’ distils the two ensembles’ pioneering approach to heavy music into psalms for the forgotten, threnodies of lost love and odes to vengeance.

“Emotionally coherent but tricky to categorize. BIG|BRAVE are the sound of the raw unconscious, turned up loud.” - Pitchfork

“The Body have become one of the most interesting and difficult to pin down groups in extreme music.” - Rolling Stone