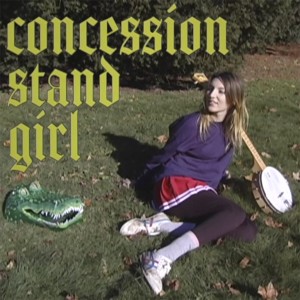 “I think my music provides space for me to say the things I can’t always say in real life.” says Virginia native songwriter and multi-media artist Corrinne James. “That’s what I love about song writing—There’s room in music for all of the conversations that can’t exist in reality.”

Her modern folk production and poetic song writing links the sounds of classic folk artists like Joan Baez and Steeleye Span to a 21st century context. James wrestles with guilt, purpose, and jealousy through vivid narratives in the songs that make up her vast self-releases.

On the title track for Concession Stand Girl that opens the EP, James sings the inner monologue of an unappreciated ticket-taker at a high school football game. James plucks a sparkly banjo and sings details of the concession stand girl’s relationship to each of the spectators who must go through her to enter the game. “Although seemingly insignificant, the concession stand girl must interact with each spectator as they enter the football game. Despite being unable to physically see the game, inside of her head she narrates her relationship to the people at the game.” The track “Anywhere Else” sits in contrast to the rest of the EP, being the only song where James plays guitar instead of banjo.

The last song written for the EP, “Anywhere Else” describes the tense emotions that come from comparing yourself to others in the eyes of your partner. “The protagonist is convincing herself, as well as her partner, that she could leave at any moment. She doesn’t want to be taken for granted anymore.” “Big Blue World” is a touching closer to the EP, where James sings about finding her way back to the place that feels most like home. James examines the fleeting nature of ambition and asks what really creates the feeling of contentment. Describing the song’s lyrics James says, “You can achieve everything you want, but sometimes it doesn’t feel like anything compared to just feeling at home and feeling who you are deep down.”