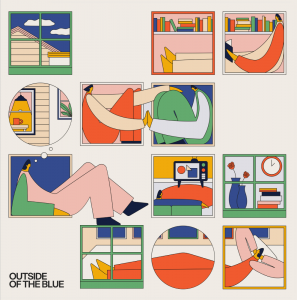 Drawing inspiration from Buddhist teachings and the hopeful attitude of frontman Johnny Quinn, Liverpool-based four-piece SPINN return with their staggering second album ‘Outside Of The Blue’.

Across the 11 tracks SPINN double down and distill their sound, delivering festival-ready indie-pop packed with earworm hooks, feel-good guitars and a newfound determination to break out of the boxes in which they’d previously been confined. The record splits the world into two distinct spaces; the blue, which represents periods of anxiety and depression, and the other side; a place filled with colour, endless opportunity and brimming with hope.

The mindset and the mantra of the album can be equated with Buddha's main teachings “avoid evil, do good and purify the mind,” having himself found solace in meditation and mindfulness over the last 18 months. Born out of a period of change for the band, including the departure of their lead guitarist, Johnny and Sean handled most of the lyrics, bouncing ideas off each other via voice notes and phone calls when not physically together in Sean’s decked out DIY studio.

Diving deeper than before, the band’s second album offers a nuanced commentary about their own experiences with anxiety, depression, the power of love (and loving someone) as well as disillusionment with the government.