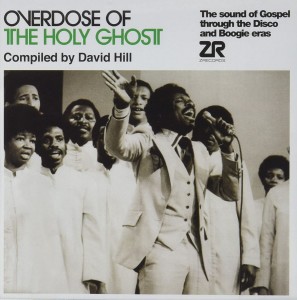 The album leads with a track from The Clark Sisters who are without doubt one of the most successful and prolific family gospel groups of the last forty years. Originally released on S.O.G. Records (Sounds of Gospel), ‘Overdose of the Holy Ghost’ was recorded in 1981 and would go on to become the group’s biggest crossover hit after being licensed to Elektra Records and released internationally in 1983.

The ‘Queen of Gospel Music’, Shirley Caesar turns in a smoldering, socially conscious, Philadelphia International inspired groover with ‘Message To The People’. Gospel artists are well known for taking popular secular songs – or riffs from them – and adapting the lyrics to take the song in a spiritual direction. Kristle uses The Emotions’ ‘Best of My Love’ as its foundation, and builds from a slow intro, gradually turning up the heat until it’s the dancefloor burner that is ‘I’ll Go’.

With further disco and funk induced soul provided by many more Gospel luminaries, plus exclusive edits from David Hill and Z Records’ Dave Lee, ‘Overdose of the Holy Ghost’ is a shining example of church music that has been influenced by secular soul that was built for the dance floor.

“Gospel music has often followed the prominent trends in secular music, probably in the hope of widening its audience by giving the subject matter a sprinkling of cool. In the 60s it happened with R&B and then funkflavoured gospel, the 70s brought sweet-soul crossovers, and by 1975 the sounds of early disco had started to permeate the genre. This compilation brings together overlooked gospel gems that have their production rooted in disco and boogie, the sound of the early 80s that followed in disco’s wake. It’s only recently that this music has begun to be appreciated by fans outside of its original target market, and I’m glad to help it finally reach a wider audience.” - David Hill