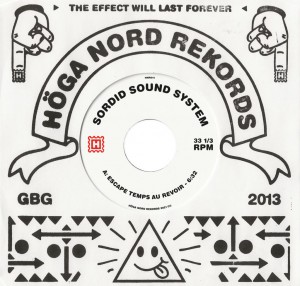 Stuart Evans, aka Sordid Sound System is one of the founders of The Green Door Studio, a not for profit, analogue recording studio in Glasgow which emerged from an increasing disillusionment with the modern ways of music production. His sound holds outsider qualities, being everything but generic and predictable, mixing dub with movie soundtracks in the tradition of Carpenter and Italian likes.

On this 7” released on Höga Nord Rekords, SSS deconstructs and rebuilds music in an imaginative style, pairing tribe-ritual “back to ape”-beats with synthesized cosmic harmonies. In a way, we are enjoying straight up dub here but this record is also a display of the vivid and creative Glasgow scene centred round “The Green door studio” and record labels like “Invisible Inc” where krautrock and 80’s/90’s electronic music is part of the foundation. Boundless joy for every girl and boy!

Patrick says: I buzz off Sordid Sound System, and his first appearance on Höga Nord is a techno-tribal drug chug masterpiece, backed with a wonderfully wonky but of twisted dub.

A1. Escape Temps Au Revoir
B1. Beginning To See The Dub