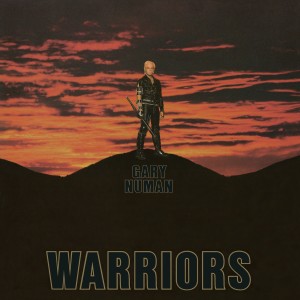 “I still like a lot of the Warriors stuff and Bill Nelson did a lot of very inventive things on it which, because of our differences, I failed to appreciate at the time. I think the Mad Max image convinced a lot of people, the press especially, that it was a sci-fi album. Much of it though was actually quite autobiographical. Even songs like ‘The Iceman Comes’ and ‘This Prison Moon’ were more to do with what I was going through than anything sci-fi. Lyrically I was already becoming overly focused on the career struggle. Warriors was written, in the main, in a hotel room in Jersey. My girlfriend had just left me, I’d been evicted from the house I was living in and I felt pretty much alone in more ways than one. Despite its surface gloss of futurism it was really very inward looking. To me the image was meant to represent someone fighting for survival as much as anything” – Gary Numan

The achievements over his four decade career (and counting) are remarkable for someone who never made any concessions to mainstream success. Seven Top 10 singles, including ‘Are ‘Friends’ Electric?’ and the debut solo hit ‘Cars’; seven Top 10 albums, three of which topped the charts; and huge critical acclaim, most notably with the Inspiration Award at the prestigious Ivor Novellos.

In a career that spans over forty years, the music evolves and the themes change. But fans remain fascinated by Numan for the very fact that he’s so uncompromising. Gary recently released his twenty first album Intruder in May 2021.