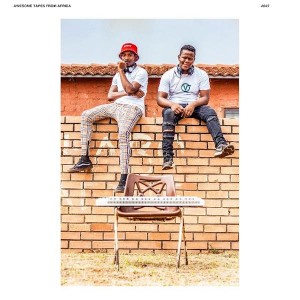 It wasn't long before Awesome Tapes would snaffle up some more hot amapiano sounds. the genre seems to have well and truly exploded from its native South Africa and has hit a massive point of global adoration. I'm sure other cities and urban areas must be replicating what's happening here in Manchester too - with the sound a constant up-and-coming soundtrack with the youth, trend setters and club goers alike - keen for new sounds with authentic heritage; and like its predecessors kwaito and gqom it comes with style in abundance.

Hitting a cool 110BPM territory, gliding in on Reese basslines and punctuated with 808 subs; tense strings and dark synthlines make up this midtempo, late night dance music which glows with dipped neons and oozes electronic soul.

19 and 18 respectively, Kgothatso Tshabalala & Zakhele Mhlanga (DJ Zakes) are born after the onset of democracy ('ma2000') and ride a wave of youthful excitement and creativity around the Gauteng province of SA where many believe amapiano was first birthed.

"Teenage Dreams" is twelve tracks which capture both the sound of amapiano, the energy of late teenage South Africa and the excitement of merging modern production technology with fierce creative spirit. It's no wonder everyone from your mate down Moss Side, to the hippest DJs on NTS are championing this sound right now. It's fully genuine, a little bit gangsta, and is aimed squarely at the hips - a pocket rocket of fresh fire for the clubs, jeeps and yards. Check!