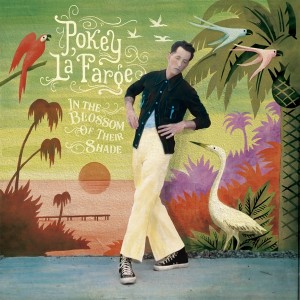 Pokey LaFargeʼs 7th studio solo album, ‘In The Blossom Of Their Shade’, showcases the positivity of coming out of the darkness and into the light.

When the 2020 global pandemic hit, LaFargeʼs rigorous work ethic powered him through the potentially challenging creative period. As days became a couple of months, songs blossomed from embryonic ideas into fully-formed ones and he was ready to move on, which typified his mindset as a working artist.

With this record, LaFarge captures the thematic notion of being the perfect summer afternoon soundtrack... the type of music you want to listen to while having a cocktail with your significant other.

It makes sense musically as well - LaFarge intentionally crafted songs that created space and have melodies that can glide throughout a composition thatʼs a far cry from the swing and blues-infused songs of his earlier work.

LaFarge is an artist who refuses to rest on his laurels and compromise. He's always motivated and ready to create. ‘In The Blossom Of Their Shade’ is one of LaFargeʼs strongest and most mature efforts to date.

Get It ʻFore Itʼs Gone
Mi Ideal
Fine To Me
Drink Of You
Rotterdam
To Love Or Be Alone
Long For The Heaven I Seek
Killing Time
Yo-Yo
Goodnight, Goodbye (Hope Not Forever)