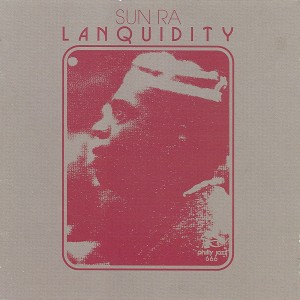 Recorded in New York in the Summer of 1978 for Philly Jazz (who attempted to form the Ra-legion Cosmo-Fan Club!), this legendary (and previously ultra-rare) LP is maybe the closest Sunny ever got to a crossover album! That's not to say that the out-of-this-world arrangements have been toned down (far from it!), but you can hear the influence of disco and fusion on tracks like "Where Pathways Meet" and "That's How I Feel". It's had a few re-issues over the years, including an amazing deluxe version, which was enough to get my pants moistened, but now it has been reissued on vinyl with all original artwork, and some amazing liner notes in which they interview Bob Blank (the engineer), Michael Ray, Danny Thompson (Arkestra musicians) and Tom Buchler (from Philly Jazz) - I have well and truly soaked my trolleys!! Definitely one of the top five all-time greatest Sun Ra albums - if you've never bought one before, I reckon that this is the perfect introduction to THE GENIUS OF SUN RA!!!

A1. Lanquidity
A2. Where Pathways Meet
A3. That’s How I Feel
B1. Twin Stars Of Thence
B2. There Are Other World (They Have Not Told You Of)

Sun RaRa To The Rescue