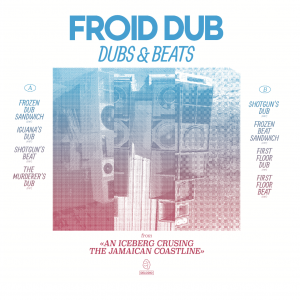 Electronic dub versions & bonus beats of Froid Dub’s first, and now highly collected debut LP: "An Iceberg Cruising The Jamaican Coastline". If you missed that one, then here's the chance to explore more of François Marché's unique concoction of modern digi-dub.

Not sure whether it's deliberate or not, but the coastline reference in the title and the echo-soaked fog horn blasts, complete with the swaying riddims and aquatic atmospheres really add to this coastal dub vibe!

I've gotta be honest, I haven't gotten this excited about a new dub record for quite some time! If you're into Sheriff Lindo, Andy Rantzen, Adrian Sherwood and the whole Outer Time Inner Space crew then this should be well up your echo chamber!