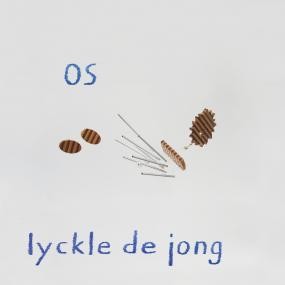 This album is titled Os. When I look at the shape of these two letters, O and S, I realize that they are a rotation and an oscillation.

Os is Dutch for Ox. An ox is a castrated male bull. The primary benefit of castrating bull calves is to temper their tempers, making it easier and cheaper for people to handle them. Os is also an abbreviation of oscillation, -cillation being castrated off. Oscillation means a movement back and forth in a regular rhythm, like breathing, push-ups, tides, swinging or sound. For this album Lyckle was not dealing with oxes or bulls, but with oscillations, guiding them through synths, handling their tempers. If I look at the etymology of oscillation, I learn that it stems from the term Oscilla, which were ancient disks depicting a face or animal on each side. Oscilla is a diminutive of os and means ‘little face’. They were hung in trees during religious feasts honoring various deities, as well as being thought of as purifying the air as they swung in the wind.

The wind chime with its little sunny face, smiling on the cover of this record was hanging in the windowsill of Lyckle’s studio, behind his back, where the wind would make it jingle, averting the Evil Eye according to apotropaic magic. In ancient Rome, wind chimes named Tintinnabulum were decorated with a phallus, which was also seen as a good luck charm. Phallic charm also appeared as objects of jewelry such as pendants and finger rings. It has been suggested that some types of phallic pendants were designed to point outwards in the direction of travel in order to face any potential danger or bad luck, nullifying it before it could affect the wearer.

When I take the record itself out of the sleeve, I see that there are two phalluses carved into the surface of the vinyl, like little ornaments. When you start playing the record, they start chasing each other, going round and round. They point in all directions of the room, but are never able to point at each other. Finally, I am told that it is recommended to listen to this record with the window open, allowing sounds from outside to blend in with the music. " - Bernice Nauta

Patrick says: I don't think I have the requisite reading age to fully appreciate the sales notes here, but I'll do my best to explain the music in words of two syllables or less. Pots, pans, whirrs, vamps, weird, new age noise.