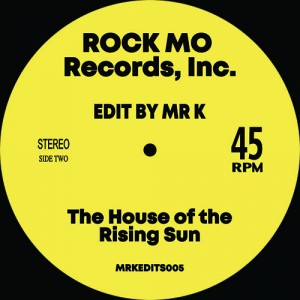 Disco king, Mr. K, drops the fifth edition of his super sought-after and limited edit series. Another double dose of pure disco elation, retouched, tweaked and extended in all the right places, cut loud and proud on either side of a 12 inch.

On the A-side we get an extra heavy helping of disco drums as Danny extends the perx from Gonzales "Haven't Stopped Dancing Yet", into a ferocious rhythm tool perfect for those mid session carnival moments. Meanwhile on the flip, there's been a bollock dropped and instead of the tasty and tapey edit of Nina's inspired version of "House Of The Rising Sun" (as advertised on the label) we get a super emotional and passionate edit of Marlena Shaw's "Pictures And Memories". So, a bit of a mispress, but in no way a disappointment.

A1 - Haven't Stop The Percussion Yet
B1 - Pictures And Memories