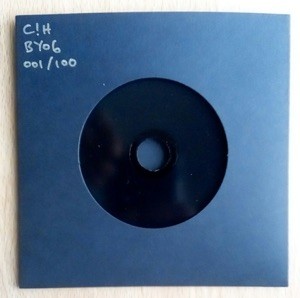 'The Way Back Forward' is the follow up to Cheetham Hill artist Caution!Horses' 2017 debut album, 'According to Your Cloth'
("A wonderful and completely under-the-radar offering of DIY electronix, forward-leaning techno and industrialised utopia...(Like BYO1), another stone cold epic into the annals of UK electronica..." Piccadilly Records)

ATYC (BYO2) was the first new Byo-Jo Recordings release in 25 years, with C!H citing three tracks that had caught his imagination years previously as influencing his style: the Sheffield/Berlin collaboration of Robert Gordon and David Moufang (View to View) that gave us tracks Heptagon and Seven Hills; and Drexciya's Davey Jones Locker out of Detroit. All possess a timeless beauty and simplicity, and C!H used these as a template to create his own brand of understated techno in Manchester.
ATYC went on to draw comparisons with tracks by luminaries including Herbie Hancock, B12 and Model 500.

'The Way Back Forward' is inspired by that same Sheffield/Berlin/Detroit sound. While ATYC can be taken as a statement of intent re. a new musical direction at the time it was written, the theme of TWBF is autobiographical.
Featuring a collaboration with North Manchester's Urban Technological Assault, across seven tracks the album tells a salutary tale of highs, lows, and final redemption.

In common with all recent Byo-Jo Recordings releases, the album comes as a limited edition plain black CDr (16-bit WAV files in physical form), hand numbered in a black pocket.