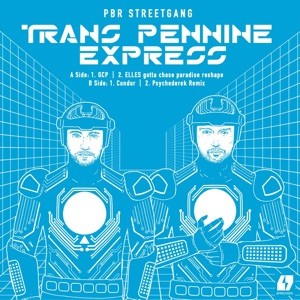 We're heading deep into the bowels of the cosmic basements with our latest vinyl release which is headed up by those 2 lovely souls from Leeds, PBR Streetgang.

From rocking it all over the globe to releasing a plethora of absolute yesmate bangers & a long player too, we're pretty thrilled that they have joined our family of music makers with their double A side E.P. 'Transpennine Express'.
GCP gets the party started and instantly takes you to 4am at Barbarellas Discotheque with stacks of throbbing-ness & pumping, laser reaching vibes whilst the boys take you down a wormhole of electronic music pleasure.

Condor jumps ships from Barbarellas & hot foots it over to Berlin to sweat it out in basement with only a smoke machine for company and tons of ravers. Pulsating synth surfs across a chubby bass with some slick as heck cosmic stabs making this a multitude of all that is good in proper dance music.

If the originals are on the dance floor then we made sure to go full on weirded-out on the remixes and crikey they don't disappoint!
ELLES totally flips the script on GCP and turns in a hazy, broken beat style electro groover with a full vocal giving it the sound of a lost track by A Certain Ratio.

Psychederek takes the 'make sure to go really wonky!' advice we gave when sending the parts to Condor and matches ELLES with his full on acid tinged psych wig-out rework. The beat sure is broken, the bass guitar punches, the old school piano thumps and the whole thing sounds like an amazing Andrew Weatherall remix from the mid 90's you never knew existed.

Something for everyone.from clubs to shebeens to after parties & beyond...