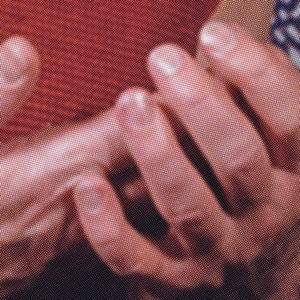 Aleksandir's debut album on Omena, "Skin", was both musically and conceptually, a truly personal and expressive record. Here we have three tracks from the album in glorious remix form.

Tom VR has managed to carve out a unique sound with his music, released on labels such as All My Thoughts, Intergraded, Lionoil Industries and Valby Rotary. He delivers a dreamy, lucid and melodic take on "Skin & Mind" and makes an already beautiful track almost implausibly wide-eyed and holographic as its steams through at breakneck speed.

Ikonika remixes "I Used To Dream'" Her take on the track is a futuristic electronic beat construction, polished with class and driven by weighty and intricate rhythms and production. It's sassy and slinky, and'll have you rubbing up against a random stranger in the shadows of your favourite nightspot club 4AM at the weekend.

John Dunk launched the Cameo Blush project in 2019 with the "Murky Waters" EP on Nick Hoppner's Touch From A Distance label and released a follow-up "Lucky" on Ross From Friends' Scarlet Tiger label. Both showcase his inventive rhythms and sunrise-ready melodies. His remix of "Prado" is both colourful and vibrant, a melting pot of swirling sounds that gives the original new life... Mega, mega stuff here - you snooze you lose!

Matt says: A richly modern record that rosters in a cutting edge trio of producers for remixes. The result is three inventive reworkings accentuating the soulful yet highly contemporary sounds from the original. Hard to pick a fave but Ikonika's mix of "I Used To Dream" will be receiving plenty of rotation out in the clubs.

Brandon Wolcott & EmilMusic Of The Record