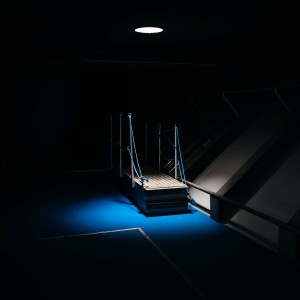 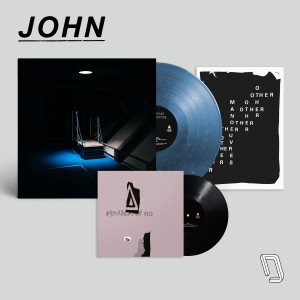 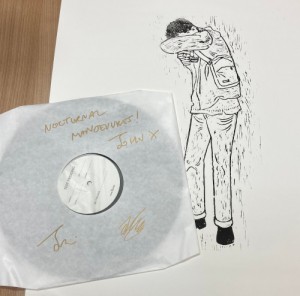 Pre-order the LP / CD to be in with a chance of winning a signed test pressing and limited edition print!!!
NPN.

Nocturnal Manoeuvres – the new album from JOHN - finds the duo expanding upon their celebrated idiosyncrasies once more. It sees them returning to their trusted producer Wayne Adams (who was behind the boards for both of their previous albums) knowing his success in capturing their presence as a live band. Realising the expansive quality of the resulting recordings, they then enlisted mastering engineer Sarah Register (Protomartyr, Future Islands, Chastity Belt) in order to deliver the sense of space that the varied track-list deserved. The result is a towering, titanic body of work – one that moves easily between cinematic post-rock, elastic post-hardcore and pummelling noise rock.

The new record is the follow-up to their second LP, 2019's Out Here On The Fringes, which catapulted them into the Top 40 of the UK Independent Vinyl Chart, was featured as an Album of the Day on BBC 6Music with three successive playlisted singles, and saw the band hit the road with the likes of IDLES, METZ and Mclusky.

Having established an international presence with a blistering KEXP live session and a month-long journey through Europe in support of Out Here On The Fringes, JOHN return to the live stage in 2021 with a mammoth run of UK and Irish dates throughout the autumn of this. As venues continue to reopen, it offers a captivating chance to catch a band who've built a devoted following through the sheer energy of their live show: a celebration of the primal intensity of the guitar-drums duo as a format and a monument to idiosyncrasy, which is exactly the sort of manifesto you could attach to Nocturnal Manoeuvres as a whole.

Laura says: Ooof! This is just awesome! Intense, dynamic guitar noise that has more in common with the likes of Jesus Lizard or any number of bands from the 80s DC scene than any more contemporary noisemakers. (The dual vocal on Šibensko Powerhouse in particular brings to mind Mackay / Picciotto.) That's not so say their sound is dated, far from it, this is the most vital noise around right now.

1. Return To Capital
2. Šibensko Powerhouse
3. A Song For Those Who Speed In Built-Up Areas
4. Haneke'd
5. Austere Isle
6. Jargoncutter
7. Stadium Of No
8. Power Out For The Kingdom
9. Northwood Turret
10. Nonessential Hymn