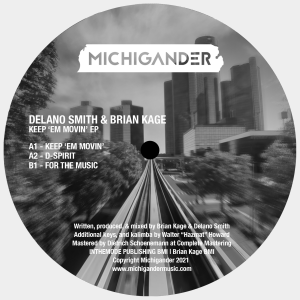 As well as both featuring on this week's killer "Unity Vol. 2" compilation; Brian Kage and Delano Smith inject some extra energy into the scene with this 12" by Smith on Kage's Michigander label.

One of Detroit techno's original forefathers (despite hailing from Chicago, he grew up on Detroit's west side), Delano Smith has seen the various 'waves' of techno comes and go - hell, he was even spinning 'progressive' tracks before they were even labelled techno! When he discovered the newer-on-the-scene Brian Kage's productions and record label he knew a collaborative release was in the pipeline - which brings us handily to the EP in question.

Opening the release is the title track, a typically Smithian, driving number with pulsating synth tones and deep, call and response piano stabs. The ever so slightly pitched down vocals are modern and effortlessly cool, a style that resonates with today's dancefloors, but done tastefully, and with lyrical content that sets the record straight about what it really means to represent Detroit.

"D Spirit" takes an ancestral turn. This is spaced-out Detroit techno meets afro deep at its finest. Forward moving keys are bathed in deep, celestial pads as shuffling hats accented by light hand percussion beckon the body to move. Lively marimbas cut through the hypnotic undertones and awaken the senses with soulful appeal. A fluid bassline rumbles beneath while baroque pianos add tension and heighten the atmosphere.

The final track rounds the release out with an exclamation mark. For lovers of Delano Smith's infamous remix of "A Message for the DJ," "For the Music" will feel instantly familiar, if not almost its closely related deeper, distant cousin. Many will recognize its meditative musings, but here it's been re-contextualized into some true school, bumping, real-deal, dynamic Detroit shit.

Groove ArmadaEdge Of The Horizon