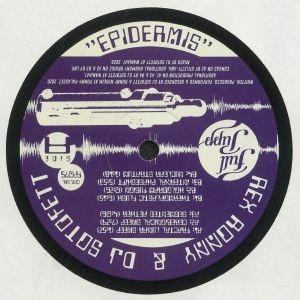 8 years after DJ Sotofett’s last outing on Full Pupp, the Norwegian label received some tracks perfectly timed AND perfectly primed for that elusive number 75 release.
DJ Sotofett and Rex Ronny embodies a solid 7 track EP for Full Pupp with a strong Sci-Fi pallet of Cosmic-Italo racers. “Epidermis” is not another conjectural Nu-Disco record but a strong Disco-Dub infused travel in rhythm and melody. The entirety of the EP is bound together by four Galactic synth tracks and three driving Disco cuts, all with an individual approach. It’s a solid nod to the excellence producers of Italian Disco and UK left-of-center dance music has taught us since the late 70’s. Rex Ronny (aka Ronny Nyheim from PsyPal fame) was challenged by DJ Sotofett to play all synth parts live in the studio, for Sotofett to mix the material in his new studio set up for ultimate Cosmic, Dance & Dub sonics. To perfect the rhythm suction, congas by Stiletti-Ana (from Jesse) was added in the mix, and LNS contributed with a harmony-bridge for maximum pathos

Matt says: Futuristic hybrids of italo, house and hi-nrg electro-disco all with that added Full Pupp playfulness! Beach balls at the ready folks!

A1. Fractal Lunar Sweep
A2. Cerebionical Sweep
A3. Segmented Aether
B1. Thermoplastic Flush
B2. Hologram Fusion
B3. Internal Phaseshift
B4. Nuclear Stratum