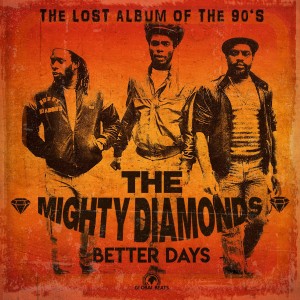 The Mighty Diamonds are among Jamaica’s greatest - ever vocal trios, which is quite an accolade considering that the competition includes the Wailers, Heptones, early Burning Spear and Culture. After making their breakthrough at Channel One and then reaching a wider audience on Virgin’s Frontline label, Fitzroy “Bunny” Simpson, Lloyd “Judge” Ferguson and lead singer Donald “Tabby” Shaw continued writing and recording long after their seventies’ heyday and not least for London’s Ruff Cutt band, based in NW10 and led by guitarist/producer Tony “Crucial” Philips.

During the late nineties, after many years spent backing visiting Jamaican artists and playing studio sessions for other producers, Ruff Cutt revamped their own label and got serious. A string of well - produced roots and lovers rock singles followed - some highlighting UK reggae talent, and others featuring big name Jamaican artists such as Freddie McGregor, Mykal Rose and Beres Hammond. The Mighty Diamonds fit in the latter category and Ruff Cutt release d two singles with them in 1999/2000, White Squall and this album’s title track. Both were immediately hailed by fans who rejoiced at hearing the Diamonds in such revolutionary mood. Those songs now make their return here alongside three previously unreleased tracks from the same sessions, and all five are accompanied by matching dubs that were a match for anything coming from Jamaica at the time. Over twenty years later and better days have come at last, for fans of the Diamonds and top quality nineties’ roots music