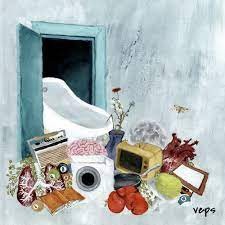 Introducing Oslo’s next big exports, Veps. Open The Door is an introduction to their nineties tinged, pop rock and out September 3rd on Kanine Records.

Hailing from the eastside of Norway’s capital, Veps have known each other since elementary school and began playing music together in middle school, aged 14. Although growing up with very different influences, the girls had a common sense as outsiders and while making a short film together decided to make an impromptu band. With Helena, Laura and June already accomplished at their instruments, Maja was assigned as drummer, she had never touched a drum set before, and Veps was born. Already causing a stir playing a series of DIY shows wherever they could, the band self-released Do I Hear A Maybe? and Funny Things.

Equipped with their stunning debut EP which showcases songwriting beyond their youthful years, Veps signed to New York label Kanine Records, planting them firmly as one of the most exciting bands to watch.