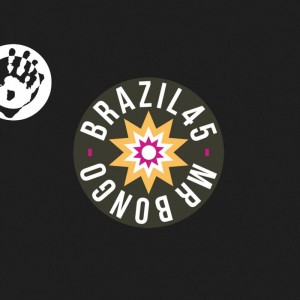 For number 93 in the Brazil45 series, Mr Bongo present two favourites from the Harmony Cats. A female vocal quintet (who later became a trio) from Sao Paulo. They formed in 1976 and were most prolific in the disco period. ‘Harmony Cats’ Theme’ from 1976 is probably the group best known track outside of Brazil. Owing a lot to Rhythm Heritage’s version of ‘Barretta’s Theme (Keep Your Eye On The Sparrow)’ it’s wonderfully spacey breakbeat and percussive production with lush, floaty vocals makes it a real crossover classic record. ‘Seja Como Nos (De Pe No Chao)’ is instantly recognisable. Tucked away on the b-side of their 1979 single ‘Tem Dinheiro Nisso’ on Young Records, it is a beast of a cover version of The Jacksons’ classic ‘ Shake Your Body (Down To The Ground)’. Nothing subtle or sophisticated here. Just a song of pure disco joy, enhanced with awesome Brazilian production and the Cats’ trademark vocal arrangements. A get-of-jail-free card for any DJ that finds themselves stuck with an empty dancefloor, but also one that will put smiles on the faces of the more discerning leftfield club crowds.

Matt says: Nice, late 70s Tropicalia-styled moments which are much more appropriate to play than their original incarnations. I've heard The Jacksons-penned, "Seja Como N S" out and about in town, so some upfront DJs out there know what's right.