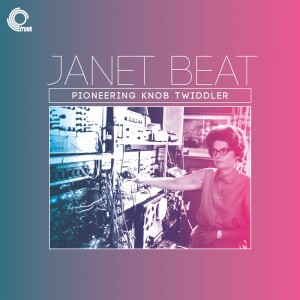 You have never heard of Janet Beat. She has been making beautiful electro acoustic work since the early 1960s. Loads of people tried to stop her making music, people like her parents and male musicians who probably felt threatened by a talented woman in their post war male dominated electronic field. Her music has not been issued before. It’s here now, you lucky people. And no, I have not made her up.

Janet Beat does not make beats. She makes sublime electro acoustic music, much of it sounds like the music from Forbidden Planet, or maybe music just beamed in from another planet. Her early 1960s tape work was all destroyed by her father when he used her tapes to hang up his tomato plants. What a bastard. Anyway, her late 1970s and 1980s work has survived, and here it is for the very first time. And before you start asking questions about the title of this LP, I asked Janet Beat if it was OK. I spent ages trying to think of a good title, but then looked at the superb photo of her in her front room (the one on the LP front) and my mind was made up.