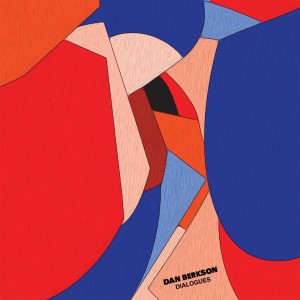 Following a move to London and an immersion in the city's deep house scene, Dan Berkson's subsequent rediscovery of his earliest musical foundations and the drawing of inspiration from London's buzzing contemporary jazz scene would lead to Dialogues - an accomplished and rewarding body of work pulled together during his final days in London before relocation to California.

"It was inevitable that Dan Berkson would make a jazz album like Dialogues: joyful, danceable, entertaining, driven by the pleasure principle, and filled with virtuosity. It represents Berkson's experiences in London, where jazz is a living, breathing, dancing scene. It's his love letter to the city, bristling with British talent such as bassist Andrea di Biase (Heidi Vogell, Maria Chiara Argiro, Bruno Heinen) and drummer Jon Scott (Kairos 4Tet, Sons Of Kemet, Mulatu Astatke) and recorded in his final days in the city before relocating to California. It's also rich with history: the musical journey that brought him to this point covers almost 40 years and 4,000 miles.

Berkson received lessons from Chicago boogie-woogie veteran Erwin Helfer - who in turn had learned alongside foundational legends such as Mahalia Jackson and Glover Compton. In 2001 he came to the UK, throwing himself into the deep house scene of East London, his duo with James What signing to Steve Bug's legendary Poker Flat.

But eventually he felt that he'd achieved what he could in the house format. Rediscovering the piano and discovering that jazz provided him the opportunity to keep learning, he enrolled in Trinity College in South London just as South London's jazz scene was exploding into the public consciousness.

Dialogues is a jazz album, not an electronic one – but all the groove-based influences, from the rootsy blues and ragtime of his youth, through the funk he played at college and the house he imbibed in London can be heard, as can his love of the studio as an instrument and mixdowns that suit a club soundsystem. Detroit dons Theo Parrish and Moodymann are every bit as important to this record as Charlie Haden, Carla Bley, Keith Jarrett, Ornette Coleman, Jimmy Giuffre, and Herbie Hancock. There's 50s and 60s cool modernism (just listen to the elegant ripples of "Sketches"), there's 70s funk fusion ("Unity" kicks things off with a spring in its step), and of course there's the pumping blues heart of "Live Bait". Above all else, though, it's a personal document: a life of music and collaboration crystalised in a magical, transitional moment. Where Dan goes next musically is as uncertain as anything in these times... but this one record tells you everything you need to know about where he's been."