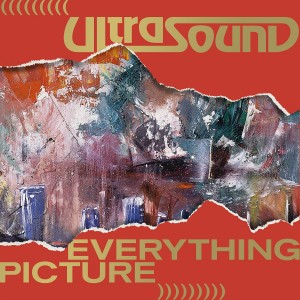 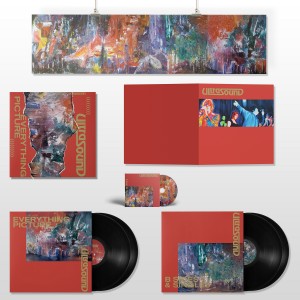 On September 24th Ultrasound will reissue their ambitious debut album ‘Everything Picture’ via One Little Independent Records. The reissue boxset will feature ‘Everything Picture’ the double album, an extra two records featuring a variety of B-sides and singles and a CD of live and session tracks. As well, a 26-page booklet and poster will be included.

Forming in 1996, British quartet Ultrasound gained quick notoriety, were eagerly courted by major labels and began making waves with their grandiose glam-meets-prog live performances. In 1999 they released their anticipated, monolithic and wildly creative ‘Everything Picture’ with Nude Records, a feat of considerable scale which may have failed to fulfil expectations they might be the next Oasis but ultimately earned them a dedicated cult following and the long-term critical acclaim they always hoped it would.

The uncompromising ‘Everything Picture’ soars from cinematic, layered textures to audacious rock n roll, with its raucously distorted guitars that sweep abrasively over anthemic choruses and a kinetic rhythm section. From the scopious opening of ‘Cross My Heart’ that makes the bands intentions perfectly clear from the offset to the dynamic attack of blistering riffs and euphoric vocal harmonies of ‘Stay Young’, the vice-tight bass and darkly joyous ‘Fame Thing’, the pulsating electronics and searing lead of disc 2 opener ‘Aire & Calder’ and ahead, the LP is a far-reaching onslaught of powerful production, bristling with ideas and invention.

Alongside chart recognition for several their singles including ‘Best Wishes’, ‘Stay Young’ and ‘Floodlit World’, Ultrasound are also remembered for a renowned performance at Glastonbury Festival in 1998 during a torrential downpour, a live recording of which is also included in this deluxe reissue.

Quickly following the release of ‘Everything Picture’, and amidst a myriad of press attention, the band broke-up. Now, we’re given the opportunity to revisit this semi-forgotten, extensive classic alongside even more of their experimental catalogue.