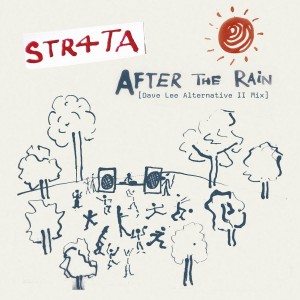 Dave Lee gets to load up the stems of STR4TA's "After The Rain" into his disco desk, the modern 12" mix aficionado carrying on the timeless tradition and giving us two, side-long interpretations of this killer STR4TA track. Produced by Gilles Peterson and Jean-Paul 'Bluey' Maunick, STR4TA is the catalyst for a homegrown, new wave of jazz-funk movement.

This rework of "After The Rain’=" harps back to the classic Brit-Funk era whilst tailoring it to contemporary club culture with a spaced out dub; conscientiously keeping the essence of what is magical in the original mix. With the aim of giving more exposure to parts which are not so prominent in the original, Lee’s production process involved rearranging and rebalancing those parts, using a fading technique to create tension, moments and surprises that flow together, capturing that raw, moment to moment interaction and improvisation by the musicians involved.

Matt says: Dave Lee, Giles Peterson and Jean-Paul Maunick under a Brit-funk state of mind? Sounds like musical heaven - and it is! A joy on the ears and the feet, you can tell how much enjoyment everyone involved is having from as soon as the needle hits the record. Your next living room disco needs this!

Str4taWhen You Call Me / Night Flight