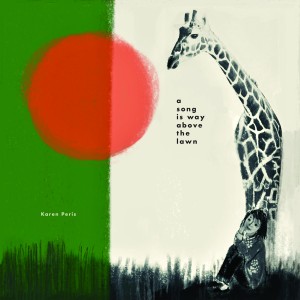 “I like that it’s possible to re-travel some of the wide open expanse of childhood imagination and wonder. The thing is, I don’t really feel that far away from those places even now, and I’m sure that’s a universal thought. The moments I’m telling about in the songs, and the wonder and the curiosity - I still feel so much of it, just as anyone does. I didn’t want to be an adult saying to a child, This is how you feel. It’s more like saying, just as a person talking with another person, Isn’t this how we all feel, and isn’t that a mystery of life, too, that we are all so connected? So, most of the songs are written in the first person.”

Singer, instrumentalist, and songwriter Karen Peris is talking about the ten compositions on her new album, A Song Is Way Above the Lawn. Written over a period of seven years, these songs make an especially melodic collection of beautifully rendered moments that will resonate with both children and adults. They offer a joy that is often poignant, thanks in part to Peris’ voice and poetry, and to the emotional, sometimes cinematic nature of the piano, central to the album’s sound. Her other instrumentation, chamber-like, with pump organ, accordion, and melodica, along with occasional nylon string and electric guitars, is spacious, allowing room for the listener’s own imagination. With the help of her husband Don Peris, who plays drum kit and upright bass, and their son and daughter, who contribute violin and viola to three songs, she has made a timeless album that has a rare and particular atmosphere of its own.

Journalists and fellow musicians have long written warmly about the singing and songwriting of Karen Peris with her band The Innocence Mission, which she started in high school with Don Peris. Her lyrics have been called ‘profound’ by Sufjan Stevens, and ‘engaging’ by Natalie Merchant; NPR music critic Lars Gotrich has spoken of the ‘supreme detail’ of her poetry. With A Song Is Way Above the Lawn, she has combined music and words with her own illustration, to make a sort of picture book in record album form. Throughout, there is an enormous tenderness expressed, for children and families, for the natural world, and for the miraculousness of everyday life. “You know how, if we take a tiny moment of a day and really look into it, it can sort of widen out and we can see how much it holds - I like thinking about that,” she explains, “and of how it can even be a moment when we’re waiting for something else to happen, that can end up being the most memorable.” The entirety of “This Is a Song in Wintertime” is devoted to a single moment when the narrator is waiting in line, outside with her family, and it begins to snow. “And all the people in line start remarking about the snow and we realize a connectedness,” Karen relates, “and strangers talk to us and there’s this feeling, like we all arrived there together, in a sense.”

A Song Is Way Above the Lawn also reflects a love of reading and public libraries, of walking in the companionship of trees, and of the sense of possibility felt in listening to the first sounds of the day. The latter is the subject of the album’s title song. Animals - elephants, giraffes, lions, birds, and dogs - walk in and out of the album, occasionally appearing as imaginary friends in times of solitude. About “I Would Sing Along”, Karen relates, “I heard a biologist talking this year about elephants. And she said that elephants do a kind of singing, almost subsonically, but if she listened very closely she could hear it”. Much of the album celebrates an attentiveness to the world and to the lives around us, from the luminous opening track, “Superhero”, in praise of the kindness and open-heartedness of kids and of all the people she most admires, to the closing lullaby, “Flowers”.