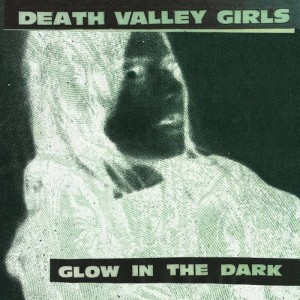 Death Valley Girls’ sophomore album Glow in the Dark (2016) is a white-hot distillation of their sound and spirit a jittery and jubilant joyride of barnburner guitar riffage, goosebump-inducing choral hooks, pounding rhythms provided by drummer Laura “The Kid” Kelsey and bassist Alana Amram, and an overarching aura of some secret and subversive power. The band wastes no time detailing their strategies as they crash out of the gate with the title track. Bloomgarden and auxiliary vocalist Jessie Jones issue the song’s call to arms “unite, multiply, and conquer” as a rallying cry to likeminded souls.

“Once you realize that money, government, and this whole system is a shitty construct that doesn’t work and stands in the way of our true magical in­nite potential, we start to glow,” says Bloomgarden about Glow in the Dark. “And we can see everyone that believes ‘cause they glow too!” It’s hard to not feel that magical tingle during the riotous stomp of “Disco,” the old school rattle-and-raze of “Death Valley Boogie,” or the -re-and-brimstone proselytizing of “Seis Seis Seis.”

While the initial line-up of Death Valley Girls featuring the core duo of Bloom-eld and Schemel with bassist Rachel Orosco and drummer Patty Schemel ruminated on the hellish realities of the modern world on their debut album Street Venom, the Glow in the Dark-era Death Valley Girls reveled in the secret bond between the mis-ts and outcasts who refused to bow to crushing weight of “capitalism, classism, and elitism.” Up until now, Glow in the Dark has been as elusive and mysterious as the forces behind its title, with physical manifestations of the album being out of print since 2016.