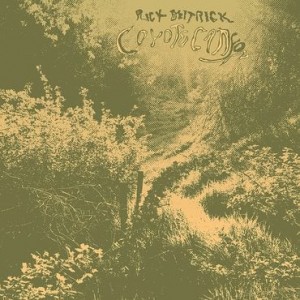 Coyote Canyon is a wilderness area behind my daughter's house where coyotes gather and howl before taking off for their nightly foraging. Little Tujunga (pronounced "Tuhunga") is a river running through the Angeles Forest near a house I lived in five decades ago. Half my ideas for this piece came from onshore guitar ruminating. The rest was improvised in studio. Emma was my close and sweet companion during this period, a lifelong deep friend. I composed her song one evening at the kitchen table of our place while she was cooking.

Tumbleweedin' describes a desert tumbleweed storm. I menaced every inch of the Yamaha, recreating the effect of these 4 windblown monsters screeching along boulders, smacking into cactus and anything else in their way at often impossible speeds, following the whims of the heavy winds. This song was completely improvised at the moment in studio and forgotten. Roy's Rain is a tribute to my great good friend and musician killed in a car accident in 1973. I found For Marsha Version2 on a well-worn studio tape. It's a variant of the same composition on the Gentle Wilderness album. I like this loose and flowy version. Movin' On has one thing on its mind -- getting away fast and now. Going Home is my improvised take on an American root song. The above seven were recorded between 1972-1975. Three Sisters was recorded on a 20-minute studio break in 1999 describing three barren red hills somewhere in the Arizona desert, a cherished location.