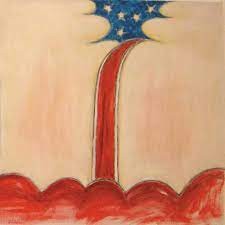 Tenth anniversary reissue of Josephine Foster’s lauded ninth album ‘Blood Rushing’. The North American Colorado based singer-songwriter has lent her warbling mezzo-soprano and interpretive wit to nearly two decades of self-produced recordings. Foster’s songs are rooted in early American folk-blues as well as classical art song and Tin Pan Alley. A rock-ballet chanté, the music is set to a Pueblo drum's metapulsing Pan-American heartbeat. Recorded in Colorado by Andrija Tokic (Alabama Shakes) with the collaboration of her partner Spanish guitarist Victor Herrero, and musicians Paz Lenchantin (The Entrance Band), Heather Trost (A Hawk and a Hacksaw) and Ben Trimble (Fly Golden Eagle). A story within a story, ‘Blood Rushing’ is a glimpse into the world of Blushing, a heteronym of the artist Josephine Foster. “North American folk linage from Jean Ritchie and Hedy West through to the present, via the chugging, churning electronic (folk) rock of The Velvet Underground, all the time infused with a joyous communal warmth.”