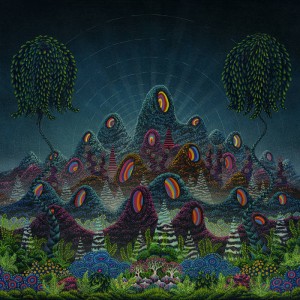 Leo Ceccanti should be a familiar name to all followers of the Claremont 56 label. Alongside sometime studio partner Gianluca Salvadori, he was responsible for two delightfully distinctive Almunia albums released on the label, 2011’s New Moon and 2013’s Pulsar. Both sets were filled with golden, sun-kissed sounds, psychedelic grooves and immersive, life-affirming soundscapes.

Now he’s decided to go it alone as Leo Almunia, delivering a debut album for Claremont 56 that’s every bit as alluring, wide-eyed and evocative as those he made with Salvadori. In keeping with his previous work, the album blends layered acoustic and electric guitars with toasty bass, dreamy synthesizers and grooves that variously touch on hypnotic house, chugging mid-tempo disco, sunset-ready Balearic beats and, on the glistening, life-affirming album highlight ‘Wishing Star’, loose-limbed jazz breaks.

What’s most significant about Ceccanti’s personal musical style is not the blend of stylistic influences he draws on – think psychedelic rock, progressive rock, jazz-rock, new age ambient and slow-motion disco – but rather the way he uses it to paint vivid aural images that genuinely linger long in the memory.

He cannily joins the dots between Mid-West Americana and throbbing, psychedelic disco-chug on ‘Loveblind’, while ‘Minor Circle’ sits somewhere between Santana, the Pat Metheny Band and sunrise-ready Balearic blues. Arguably even better is the saucer-eyed brilliance of ‘Brillo De Luna’. A dubbed-out electronic beat becomes enveloped in life-affirming acoustic guitar chords, exotic slide guitar motifs and string-bending solos with additional drums by Leo's friend Andrea Pelosini. If John Lennon had ingested MDMA rather than LSD before writing ‘Across The Universe’, it would probably sound like this.

Then there’s the album’s crowning moment, closer ‘Can’t Hold a Lover’. A heart-aching, largely ambient instrumental that channels the loneliness and anguish felt by many of those separated from their nearest and dearest during the pandemic, it sees Ceccanti brilliantly wrap a variety of sun-bright guitar textures and solos around some of the loveliest synthesizer chords you’re every likely to hear. On an album packed with effervescent, mood-enhancing musical highs, it’s a rare moment of bittersweet bliss.