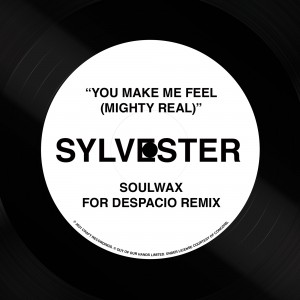 Craft Recordings and Soulwax are pleased to celebrate Pride by producing a fresh and joyful remix of Sylvester's 1978 disco classic, 'You Make Me Feel (Mighty Real)’.

Made to play on the Despacio sound system, a 50,000 watt, state-of- the-art, vinyl only sound system which Soulwax created with James Murphy (LCD Soundsystem, DFA Records) & powered by McIntosh & Jordan Acoustics, it’s been heavily beefed up, but not just in the low end – those mids punch the shit outta you while the hi-hats and top end are as crisp as freshly fallen snow. Seemingly able to inject even more energy into this classic track, you’ll be OD’ing on endorphins by the halfway mark, and by the end you’re as likely to spontaneously combust through sheer exuberance!

‘Unlike other remixes where we usually replace most of the elements and make something radically different based around the vocal, we made this remix using only the parts we found on the original multitrack that we were so kindly given by the Sylvester estate. Even though we have played this song a million times, we discovered a few elements that we had never heard before, like a crazy Patrick Cowley synth solo and somewhere hidden before the start of the multitrack, the ending of what sounds like a gospel version of 'Mighty Real’. It was a huge privilege to be asked to remix this seminal track and we hope that Sylvester will dance to it, wherever he is’

Matt says: Stadium-disco of the highest order; glitterball euphoria doesn't really get much more high octane than this. Soulwax are the absolute experts at this craft too - subtly boosting it well into the red with tons of headroom; it just seems to get louder and more intense as it spirals on and on.