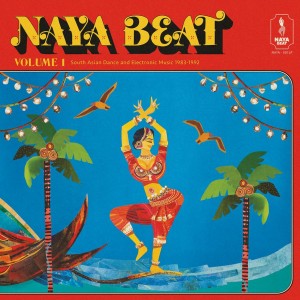 Naya Beat Records hits us with "Naya Beat Volume 1: South Asian Dance and Electronic Music 1983-1992". This is the first in a series of compilations and full-length album reissues dedicated to uncovering hidden electronic and dance music gems from the overlooked ‘80s and ‘90s South Asian music scene.
The compilation features future classics from India, Pakistan, the U.K., Canada, Guyana and Suriname released between 1983 and 1992. From East-West’s dancefloor filler "Can't Face The Night (Club Mix)" to Remo’s Balearic masterpiece "Jungle Days" (off his seminal album Bombay City!) to other disco, synth-pop, and balearic dancefloor bangers from artists like Babla & His Orchestra, Sheila Chandra, Bappi Lahiri and Asha Puthli to name a few, this double album includes highly sought after, previously never reissued and otherwise impossible to find grails.
The double album has been mastered by multi Grammy-nominated Frank Merritt at his mastering studio The Carvery and includes some killer remixes and edits by Naya Beat co-founders Turbotito and Ragz.
Turbotito and Ragz have this to say about the release: “We’ve spent the last year meticulously remastering some of the coolest finds from our collection and have had the honor of working in close partnership with many of the original artists. We are beyond excited to bring this music out to a new generation of dance and electronic music lovers.”
Founded by former Poolside member Filip Nikolic (Turbotito) and DJ and record collector Raghav Mani (Ragz) Naya Beat (loosely translated from Hindi as “New Beat”) is building on the success of seminal South Asian dance and electronic reissues like Rupa Disco Jazz and Charanjit Singh’s iconic Ten Ragas To A Disco Beat. Turbotito and Ragz have spent years digging for records in the most unusual places, from the crowded and dusty markets of New Delhi, Mumbai and Chennai to the Guyanese corner shops in Jamaica, Queens, to the Surinamese record stores in Amsterdam and the South Asian communities of London and Birmingham. They have amassed an exceptionally deep treasure trove of dance and groove-based music that has never been reissued.