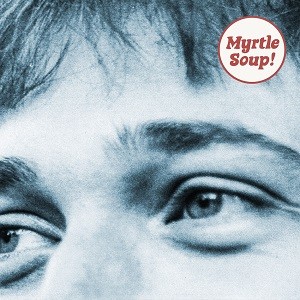 London-based John Myrtle releases his charming debut album Myrtle Soup on Sad Club Records (BUGS, Clara Mann, nudista). Homemade sounds to be enjoyed alongside ‘a nice calm sigh’, the debut album is a playful exploration of love and identity, packaged to soothe and delight. The playful folk-popper walks us through sun-soaked love anthems, heartfelt ballads, and playful numbers, set to suit a perfect summer’s day. Turning worries and fears into rose-tinted charm, John Myrtle is guaranteed to brighten every mood. Dripping with summer’s joy and a sugary mojito to hand, Myrtle Soup follows John on a walk through his kitchen on a sparkling summer’s day. Alike the rising sourdough and pottery pandemic trend, John took to making soup with a more urgent need than ever to make himself feel safe and cozy. The tracks interplay with the process of making his homespun soup. ‘Get Her Off My Mind’ finds John brooding over a new found love, before ‘On The Hob’ comes in to remind him that his magic broth is about to boil over. ‘Remember Holly Park’ finishes the album with a reflective sentiment, right before he sits down to enjoy his meal to soothe away his worries.

“I found myself making a lot of soup this past year, often just as something to keep me going when I was recording. In a way I wanted to soundtrack the euphoria of my soup coming to life on the hob and the flavours it brought to my world.”

Written during a period of pressure to be overly productive, Myrtle Soup too reflects the overwhelming anxiety that comes with this and soundtracks a way to relinquish this feeling. “A lot of these songs are about overthinking, whether it’s going over the same emotions again and again, questioning who you love, longing to return somewhere - I think cooking is very therapeutic and can focus your mind on just one thing, rather than allowing your mind to go on tangents. It also has a definitive beginning - cooking the food, and a definitive end - eating it. Lockdown meant things didn’t have a beginning or end, especially being creative. Having all the time in the world meant it was hard to get anything actually finished, it felt like there was no end in sight and I could just stay on an idea forever and ever.”

“I wanted to name the album something that would reflect my whole writing and recording process. Over the past year, writing and recording from home was amplified even more - just doing everything at home was the only thing you could do. Before I would write and record, then leave my house and go have fun. It was obviously quite a distressing time for everyone, and so I wanted a name that was homely but also soothing and reassuring. What’s more soothing and reassuring than a homemade bowl of soup!? I want people to play this record and enjoy my homemade sounds with a nice calm sigh!”

“If you’re craving a little dose of sunshine, John Myrtle’s got you covered”
So Young Magazine

Get Her Off My Mind
Here I Go Again
Just Can’t Seem To Say Goodbye
Ballad Of The Rain
On The Hob
How Can You Tell If You Love Her?
Spider On The Wall
Magpie
Remember Holly Park
Soup’s Up