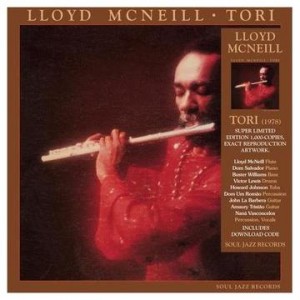 Soul Jazz Records’ CD / LP reissue of this very rare album, first released as a private-press LP in 1978 on flautist Lloyd McNeill’s own Baobab Record label in Washington, DC. The album has been out-of-print for 43 years and is lovingly remastered by Soul Jazz Records.  ‘Tori’ is a stunning album that blends Brazilian and Latin flavours with deep Spiritual Jazz. The album features a strong line up which includes legendary Brazilian figures such as Dom Um Romao, Nana Vasconcelos and Dom Salvador alongside jazz heavyweights such as Buster Williams, Howard Johnson, John La Barbera and more. These A-team musicians were all regulars in McNeill’s long-running and highly successful resident live group in New York, all set up to blend deep jazz, Brazilian and Latin music together.

Lloyd McNeill’s hypnotic ‘Washington Suite’ was originally commissioned as a piece of music for the Capital Ballet Company, in Washington DC. McNeill grew up through the era of the Civil Rights Movement in the 1960s and his life and work is a reflection of those ideals. In the mid-1960s he moved to France where he became friends with Picasso, working with a number of émigré-jazz musicians whilst living in Paris. In the late 1960s he taught jazz and painting workshops at the New Thing Art and Architecture Center in Washington. In the 1970s he travelled throughout Brazil and West Africa studying music and taught music anthropology in the US.

Theatre WestBow To The People