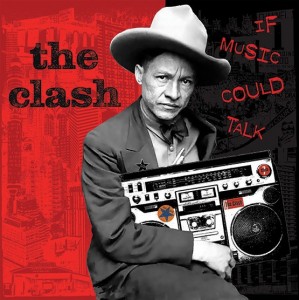 If Music Could Talk was a promo album released by The Clash in 1981, featuring interviews with all four members (Paul, Mick, Joe & Topper), conducted by long time band associate, Kosmo Vinyl, interspersed with music from the (as then) recently released Sandinista triple album. Until now, the album has never had a full release. Available across x 2 LPs and pressed on 180g vinyl, the 2021 Record Store limited edition reproduces the original interview audio, as well as the full length tracks from the album (using the 2012 audio). The front cover features a photo of Augusto Cesar Sandino - the Nicaraguan anti-imperialist leader and forebearer to the countryís Sandinista movement who in turn provided the inspiration for the album and a Pennie Smith photo on the reverse. Brand new artwork and liner notes come from Kosmo Vinyl. £1 from the retail price of each copy will be donated to War Child.

The ClashLondon Calling: The Scrapbook