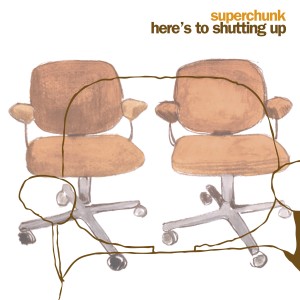 To write the songs for Here’s to Shutting Up, we gathered in Jim’s garage (he lived way out in the woods) a couple times a week for what seemed like months. We started from actual scratch with no demos or concepts, just playing instrumental music with our usual gear plus a Casio. Sometimes one of us would play the keys instead of our normal instrument, or Jon would hop on guitar and we’d use the Casio drum machine for the beat. We ended up with a LOT of ideas and plenty of good names for them—“Frank’s Bath,” “There’s Something About Marvin,” and “Bestial Warning” to name a few. We recorded practice onto MiniDisc or cassette, and I would ride around listening to these demos and thinking of words. The subject matter, in retrospect, has a lot to do with touring and travel (“Out on the Wing,” “What Do You Look Forward To?”), coming home (“Rainy Streets,” “Act Surprised”), the 2000 election (“Florida’s on Fire”), and late-stage capitalism (“Late-Century Dream,” “The Animal Has Left Its Shell”).

September 2001: Here’s to Shutting Up was meant to be released on September 18, 2001. On September 11, obviously the world changed. Our release date moved a couple weeks, but our tour dates remained and we flew to Japan in October. It was a WILD time to be traveling the world. Receptions ranged from “thank you for giving us something else to think about” to “why are you here?” We flew home from Japan and left for the UK the day the US started bombing Afghanistan. This was the climate, and the climate was not great for playing rock music. People were thinking about other things. Our friend Annie Hayden (of the band Spent) joined us on keyboards and guitar for the US leg which was an exciting expansion of our lineup and a fun way to play old songs in a new way. We had some great shows along the way and got to tour with excellent openers like Rilo Kiley, The Good Life, and Aereogramme. But the fear in the air and the length of the tour was exhausting.

SIDE B
6 The Animal Has Left Its Shell
7 Act Surprised
8 Art Class (Song For Yayoi Kusama)
9 What Do You Look Forward To?
10 Drool Collection