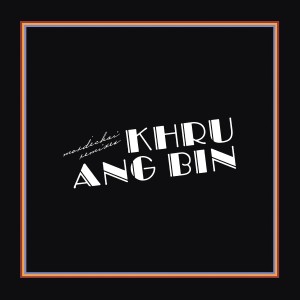 Remixes not from, but of the entire outstanding Khruangbin album, "Mordechai"! Personal as ever, the list of remixers has been hand picked by the band, not simply a whose who of hype and click bait.  All have some connection to the band, sometimes personal friendships, musical connections, or simply mutual musical appreciation. Harvey Sutherland and Ginger Roots have both toured with the band, Kadhja Bonet and Ron Trent had their own mutual fan club going on, Knxwledge sampled "White Gloves" on a recent mixtape, Natasha Diggs and Soul Clap’s Eli’s are recent buddy-ups, Quantic is a mutual friend of Bonobo (crucial in the KB origin story), while Laura is also godmother to one of Felix Dickinson’s kids.

It would be tiresome to detail each and every mix, but rest assured this is an exceptionally executed project. Bolstered by the sincere and detailed sleeve notes, which journey each artists' relationship with their band, a bit about their musical legacy, and why they were chosen.

'A good remix is when the remixer's sonic fingerprint is present, without sounding forced. It should feel like its own story, with at least some of the same characters as the original' - Khruangbin state on these highly impressive sleeve notes - and each and every track on the album represents such forethought. Very few remix albums are put together with such love, dexterity and sympathy as this one - so much so it's bound to stand as a masterpiece in its own right, just as many of the classic 'dub' LPs did from Jamaica (an influence the band themself have highly creditted in informed their sound).