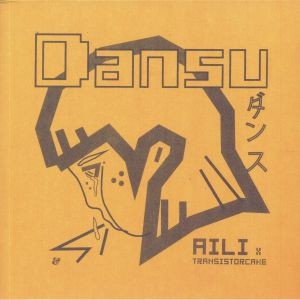 For her debut EP, 'Dansu' Belgian-Japanese artist Aili has joined forces with another of Belgium's most exciting new acts Transistorcake, the pair working through lockdown to produce a wonderfully fresh sounding 5 track release on Eskimo Recordings. Effortlessly bringing together elements of Kosmiche Musik, Acid House, Electronica, Disco & Leftfield Pop, the 'Dansu' EP is as easy on the ears as it is hard to categorise.

"I met Orson at a party a couple of years ago," recalls Aili. "I had been making music by myself for a while and wanted to take it more seriously. He was known as this 'music guy', so I approached him and we hit it off right away. He has so much studio knowledge I can take my tracks to him and he gets where I want to go with it."

"We had been batting these tracks back and forth between ourselves whilst locked in our flats earlier this year trying to get the music right. At one point I started singing over the top of 'Dansu' in Japanese, I'm not really sure why but it just came out like that and everything started to click," Aili explains.

"I left Tokyo for Belgium when I was 7 years old and in many ways my Japanese stayed at that level. When I sing in Japanese it put me into this naive, almost childlike mindset that allows me to express what I feel right away. You don't need to understand the words just the feeling that they convey."

Opening the EP is the title track 'Dansu', a hymn to dancing the night away, made more poignant being written and recorded as Brussels' club sat shut. Over a taut Motorik rhythms Aili's hushed vocals blending perfectly with lambent washes of synths to create a hypnotic, languorously funky, track with echoes of artists like Can or Stereolab.

Anyone who's heard Transistorcake's previous releases will know his love of a 303 and 'Oki' sees the pair up the tempo and twist a sinuous acid bass line over Aili's chopped up vocals and mantra like chant of "Oki ku natara" ("when I grow up") to create a propulsive club track.

Sticking with the squelchy bass line, 'Pari Pari' drops the tempo and ups the funk, Aili's vocals perfectly blending in with the ethereal synths to create an other-worldly vibe. Curious minds should know the track takes its title from Aili's dad's name for tonkatsu, a kind of Japanese schnitzel, that crackle (Japanese - Pari) as you eat them, there you go you've learned something new today.

'Genki' sees the pair bring back those Motorik rhythms that kicked off the EP this time accompanied by mesmerising synths and another writhing, hypnotic acid melody all punctuated by Aili's vocals, composed entirely from gairaigo, English 'loan words' that have entered the Japanese language.

Closing out the EP 'Futsu' has an almost kitsch quality to it, filled with a heady mix of electronic sounds, strange percussion and Aili's stop-start sing-song vocals. "When I talk to my dad on the phone and ask him how he's doing, the answer is always: "mama bochi bochi futsu," explains Aili. "So Futsu's an ode to the many, many inside jokes between my sister, my father and me."

Gleefully eclectic and joyful in nature, the 'Dansu' EP is a perfect introduction to Aili and her musical world, a playful place where anything goes. With the pair currently working together on a new live show it's to be hoped it won't be too long before we can all dance together again.