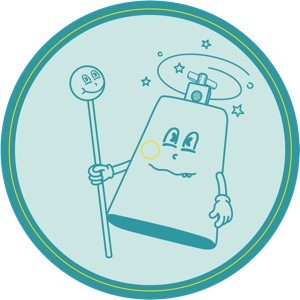 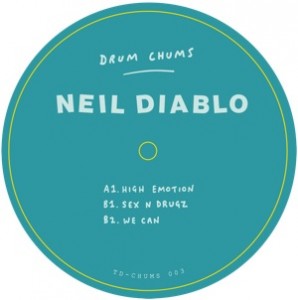 After indulging in a little free movement over the first two releases, Vol. 3 sees us back in blighty, hanging loose with a hometown hero!

Way before our bongos had really begun to beat, Neil Diablo was slaying the hand-stamped edit scene with razor sharp disco reworks on his To Rack & Ruin imprint.

His energetic and effervescent sets at El Diablo's Social Club were the stuff of legend and his occasional appearances behind the Piccadilly Records counter helped pack the TD racks with some of our favourite floor fuel. Here, our newest Drum Chum digs extra deep with a triple threat of balmy Afro-disco, comic book funk and disco uplift.
Loose-limbed and laid back, 'High Emotion' stretches out across the whole of the A side leading the kind of slow motion dance we can't get enough of.
Potent polyrhythms underpin scratchy rhythm guitar and slick slap bass while that echo-laden vocal just keeps lifting us higher and higher.

The B side bounces into being with the synthed-up strut of 'Sex-N-Drugz', a portal into a parallel universe where Prince painted the Compass Point Paisley and the tempo never exceeded 100bpm - it's tropical pop served cooler than Kia-Ora.
The finale comes with the misty eyed magic of 'We Can', a triumph of snapping Italo snares and boogie optimism which shifts into bliss via a totally tops off chorus.

Matt says: I've known, and indeed been inspired and in awe of Mr. Diablo since I moved to Manchester in 2004. One of the nicest, hardest working and genuine guys in our fair city. He's had loads of 'top' moments over the last 17 years (both production, promotion and DJ-wise), however; and I say this from the bottom of my heart - "High Emotion" might be his finest work yet! Having been gifted the promo of this last year (!! - fuck COVID!) it's been smashed to buggery in every set I've played. If ya thought "Get Serious" was Talking Drum's big money shot then they just gone and added another. I'm expecting Harvey to play this and the price to sky rocket so be an early adopter and don't be left FOMO'ing your way to discogs... Big TIP.