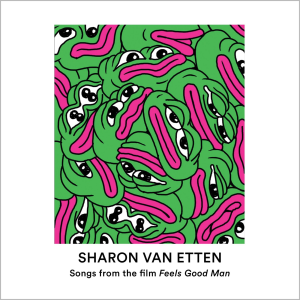 Mondo, and Jagjaguwar are proud to present a limited edition vinyl pressing of Sharon Van Etten's incredible song 'Let Go,' recorded for the 2020 documentary Feels Good Man, chronicling the emotional journey of comic artist Matt Furie and the discovery that his lovable creation Pepe The Frog had become symbol of the alt-right. A super powerful film about reclamation, artistic expression, and above all else Letting Go.

Featuring the aforementioned original song 'Let Go,' as well as a cover of 'Some Things Last A Long Time' by Texas legend Daniel Johnston as B-Side.

“After watching the documentary, I just followed the feeling of coming to terms with something and tried to evoke peace through my melody and words," says Sharon. "The song and film’s producer, Giorgio [Angelini] was a great collaborator and communicator and I was given a lot of freedom. That says a lot about the film and the people who made it."

Side B
2. Some Things Last A Long Time (Daniel Johnston Cover)