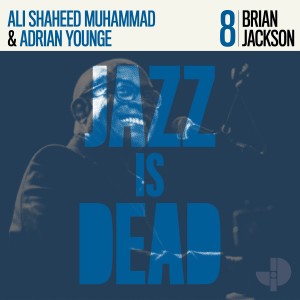 One happy thing to be grateful for during otherwise trying times is finally getting to hear and enjoy new work by a man whose music is familiar to millions even if his name is less so. Indeed, Gil Scott-Heron continues to cast such a wide shadow that even many of his biggest fans often seem to forget that there's another name next to his on the bulk of his albums, the name of a man teamed up with Gil as a teenager and proceeded to ride out the decade as his writing partner, keyboardist, arranger, and bandleader for their Midnight Band. That man's name is Brian Jackson.

His considerable backlog of unheard material reveals a stillenergetic and still-vital icon of the music wing of the Black Liberation movement. Prepare to hear from a musician whose work has contributed to the enhancement of all our lives in some form or another with the latest installment of the Ali Shaheed Muhammad and Adrian Younge’s Jazz Is Dead series.

"Brian Jackson is the first album we recorded for Jazz Is Dead. He set the tone for the entire label,” reflects Younge. “He turned our aspirations global. We never knew what this could all be, but with his inspirational character and musicianship, he led us on the right path. We are forever indebted to this icon.”

Matt says: Juicy, crazy-good amalgamation of three jazz greats getting right at it and totally in the pocket. With African, specifically Ethiopian moods and modes and a fearless, experimental approach throughout - this is fiery hot jazz music you need to PLAY LOUD!