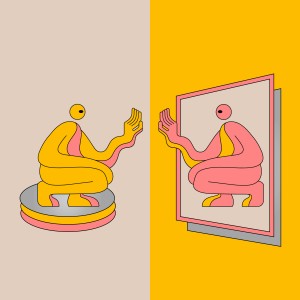 If much of DJ Seinfeld’s previous work was characterised by a sepia-tinged haze, a result of the producer’s deliberately lo-fi production techniques, then brand new album ‘Mirrors’ sees his music come firmly into focus.

“On this album I wanted to retain a lot of the raw emotionality that brought people to my music in the first place,” says Armand Jakobsson, better known as DJ Seinfeld. “But I also wanted to become a much better producer. It’s been an arduous process but it’s a real statement of where I’m at as a producer and person right now. I’ve been through various sonic explorations in the past few years but have come to understand what people like about my music and how to move forward with it.”

Recorded between Berlin and Malmo, ‘Mirrors’ is the follow-up to Seinfeld’s critically acclaimed 2017 debut album ‘Time Spent Away From U’ and his first for Ninja Tune. Named after a quote by Armand’s favourite writer, Argentinean novelist Julio Cortázar, the album finds the producer in a more settled and grounded mood after an unfortunate family incident forced the producer to spend more time at home in his native Sweden over the past few years.

Citing late night sessions learning how to produce on his laptop while at university in Edinburgh and ‘pretending to be Burial’ as key turning points in his journey, Seinfeld has now produced an album with all the emotional depth and musical dexterity of those electronic luminaries. ‘Mirrors’ touches on everything from UK Garage to down-tempo house to ambient to breaks and is an at times tender, at times euphoric sonic journey with a producer slowly realising his full potential.