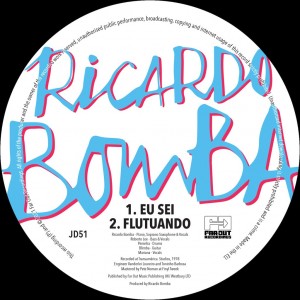 Written and recorded in 1978 by pianist, composer, sound engineer, studio owner and former amateur skateboarding champion Ricardo Bomba, ‘Eu Sei’ and ‘Flutuando’ were almost doomed to total obscurity when the master tapes were binned following a ruthless studio clear out. Luckily Bomba kept a cassette tape copy from which Far Out has remastered the release for 7” vinyl/ digital.

Throughout a varied career, which included a four year stint as bandleader of Jorge Ben’s live show (78-82), Ricardo Bomba had a string of idiosyncratic, underground pop hits throughout the 80s, including ‘Voc Vai Se Lembrar’ which recently featured on Soundway’s Onda De Amor (Synthesized Brazilian Hits That Never Were 1984-94) compilation, as well as his then award-winning, now obscure solo album Ultralight (1988).

*Disclaimer! This release was mastered from cassette tape, so the sound quality may differ from other releases on Far Out Recordings. We advise listening to sound clips before buying where possible... The music was simply too good to not release!