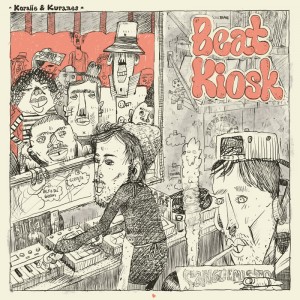 Koralle and Kuranes are two of the most inspiring and successful beat makers from Italy. As it happens, they are both from Bologna and they have been friends for a long time. Strangely enough they never did music together until now! "Beat Kiosk" is their frst joint album. Here they are treating us with 19 jazz-induced instrumentals with an Italien touch. Perfect for hip-hop heads, jazz cats and coffee lovers alike. If you are wondering what a "Beat Kiosk" is, here is the background story as told by Koralle & Kuranes: "Both of us were born in Romagna, a region in northern Italy well known for its high quality food traditions. If you'll ever visit it, driving around from the seaside to the hinterland, you can easily spot on any roadside these cool little kiosks, mostly painted in red/white or green/white stripes, where you can stop by and order some "piadina": a thin ?atbread, normally flled with ham, cheese or vegetables. It's just the most iconic street food, typical of this part of Italy. With this in mind, we would like to invite you to our very own Beat Kiosk, where you can sit and chill with your warm piadina and a cold beer while we are cooking beats and spinning some records for you. Let's get this party started right!" The kongenial artwork comes from Colombian illustrator SagaUno who was also responsible for the The Silhouettes Project artwork. Koralle has released two albums on Melting Pot Music that accumulated over 14 Mio. streams. Kuranes discography contains 9 albums and 14 EP's.

Millie says: A slice of cool for you in this sunny weather from Koralle and Kuranes with their debut album. The Beat Kiosk is the place to be to be served up juicy tunes and fat beats!