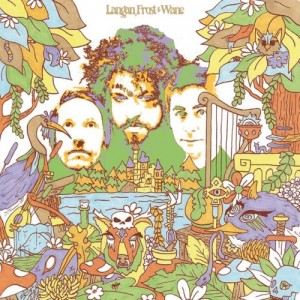 Langan, Frost & Wane is the collaboration of three songwriters, writing in the folk tradition and drawing candidly from the folk revival of the mid-twentieth century. It began as a vessel for Brian Langan (Langan) and RJ Gilligan (Frost) to explore a territory they otherwise had no outlet for in their music. While Langan's past work with The Swims and Needle points was geared more towards well-crafted pop and boogie, Frost's output from Meddlesome Bells and Dark Web was heavier, more riffs - more punk. It was in Langan, Frost, & Wane that they found a common ground. As work on the album began, themes emerged. What is it that allows a song to be playful, yet somber? How can the music tell a story on its own, apart from words? It was the same territory that the wild raucous flutes found on early Incredible String Band occupied, or better still, the second half of Donovan's A Gift From A Flower To A Garden.

They set about to capture it. Frost ran a small studio and field recording label in Philadelphia, Bells Records, allowing the duo to dive into different tracking arrangements and experimentations, building out each song organically over a period of time. After wrapping up a season of sessions, Frost suggested Nam Wayne (Wane) to Langan as a possible third collaborator. Wane and Frost had been trading folk songs for some time and it became clear he was on a similar quest. After an evening of impromptu song writing among the three it was settled, and the project solidified. The group is driven by Langan and Frost's finger-plucked melodies on guitar, complimented with found sound, instrumentation of the Middle and Far East, India, the Mediterranean, and Appalachia. It is the belief of these songwriters that they succeeded in what they set out to do. This body of work is the culmination of those long hours spent searching for what is not lost, but perhaps sometimes forgotten