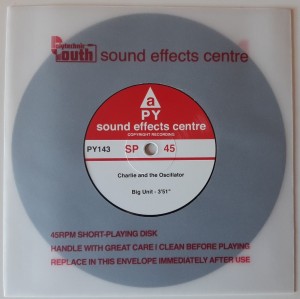 The second of PY’s new singles sees a return to the label for Charlie And The Oscillator (after the first lockdown period’s half hour sell out LP of psych / electronica mash up classic “Journey of Echoes”.) The band offer up their first 7” here and is released in PY’s lovely new BBC 70s tip-of-the-hat library tracing paper sleeves.

Formed in 2018, the London based duo fuse breakbeats, synths and samples to create eccentric alternative dance music. Their endlessly intriguing world has already drawn comparisons to the likes of DJ Shadow and Death In Vegas. Incredibly adventurous and broadly ambitious, the backbone to their sound is poles away from usual PY fayre, based upon a backbone of funk and soul. Yet from this base they merge many different genres including ambient, trip-hop, dance, disco and more, creating a new form of sample-heavy, dancefloor-friendly electronica.

On the A-side, "Big Unit" is a warm and fuzzy serving of sampledelic freakbeat, simultaneously kraut, big beat and psych pop. A bit like a Bentley Rhythm Ace cover of Can redrawn on an etch a sketch by The Go! Team, but also not really anything like that. It's a kaleidoscopic beauty though so maybe just trust me. On the B-side, 'Rüftop' (maximum respect from Piccadilly's umlaut appreciation crew) is a more pensive piece, meting out public service broadcasts over hazy breaks and a shifting shimmer of synth stuff.

The follow up second album 'Musical Emergency Evacuation Kit' is scheduled for 2021, with these 2 tracks released as a taster in advance…

All power to the imagination, All hail Charlie And The Oscillator!

Charlie And The OscillatorJourney Of Echoes