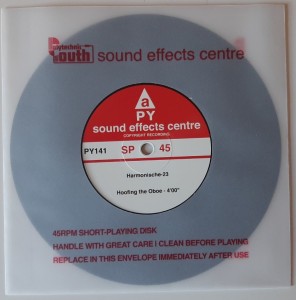 First of two more fabulous new Polytechnic Youth 45s for the start of June, PY141 sees the debut on the label for Liverpool based HARMONISCHE-23, with 2 killer tracks across 1 45. Both A and B have already been played back to back on 6music and response has been massively favourable, with the single sure to sell out super quick style. The band emerge from the ranks of Loka and The Rotary Fifth blended with additional contributors, all of whom draw on the revered Kosmische sound as it’s major source of inspiration. The single is accompanied by 2 ace film clips for each side and a digital release accompanies the PY 7 in time for release.

Musically, this kraut-pop gem sounds a little like 'Star Guitar' era Chems sampling Tone Loc's "Funk Cold Medina then blossoms into a Neu-like head nodder with some celestial vox. Also, if I see a better track title than "Hoofing The Oboe" this week, I'll eat Martin's swimming trunks (perished lining and all)...

B-side "Empathetic Eliza" shimmies between kosmische and psych, making ace use of tropical woodblocks and a vocal process so garbled it renders the words wonderfully indecipherable. Distorted Hammond, frazzled guitars and an motorik beat round out the sound - expect plenty of Clinic comparisons.