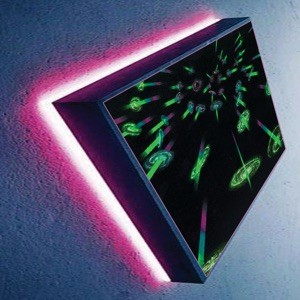 Containing three brand new movements in machine music from our treasured production stable of Kid Machine, Bob SwanS and Il Bosco; it also houses an honorary appearance from revered Danish spearhead Flemming Dalum, who serves up a particle-splitting redux of a lesser-known proto-techno nugget from Belgium.
Dalum's been traversing the star-clusters on his own intrepid missions for a while, so we're mega buzzed to have him back on the RL mothership.

Stretford based synthesizer technician, Bob SwanS has been drafted in specifically by RL head Il Bosco for his advanced skills on the patch bays. "Aphelion Run Theme", the point of which an object's orbit is furthest from the Sun, vividly detailing in sound the journey our collective consciousness must undergo in order to reach the Highest Elders. We highly recommend utilising this track alongside Dr. Greer's outstanding work with extra terrestrials.

Bosco lets loose with one of his most impassioned creations to date too. "We Almost Lost Oddbins" previously titled: "Save Our Scene", a universe-wide cry for help recorded when worldwide limitations on dancing and human co-exchange were at their most aggressive; its nonetheless positive outlook inviting us all to look both inward and outward for solutions in the New Normal.

Encased within a striking monolith art print, depicting the mystic energies of ancient galaxies it heralds the now widely-accepted belief that we are in no way alone in this universe and that channels of communication between more advanced civilisations than ours have already begun...

A1. Code Red - In Your Dreams (Flemming Dalum Red Laser Edit)
A2. BoB SwanS - Aphelion Run Theme
B1. Kid Machine - It's The K I D
B2. Il Bosco - We Almost Lost Oddbins