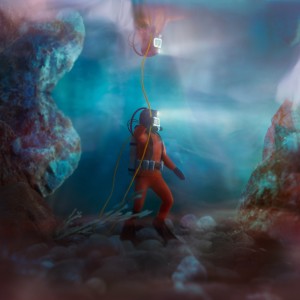 AM Jazz was the moment we all became truly acquainted with Alan Roberts; the melodic maestro beneath Jim Noir’s dandy exterior, whose hypnotic minimalist symphonies waltzed their way to Piccadilly Records’ #2 Best Album of 2020. Not to mention a whole host of great reviews….

No less than 12 months later arrives ‘Deep Blue View’ – not so much of a follow-up, as a mini-flipside moving the Jazz from AM to PM, between city and sea.

“I originally had AM Jazz down as walking around some New York backstreet at 4am, smoking in a fedora, looking for crimes to solve but it now ends as night begins,” reveals Al, of his latest tale’s gradual evolution. “Deep Blue View is the night-time album now… like losing yourself deeper in the fog, or disappearing in the sea… would someone, or some 'thing' come to save you or would they , or it , come along for the ride?”

Usually by now, Daveyhulme’s own could-be John Barry would have left distractions of success for suburban side-projects and writing with his fellow Mancunian musicians, but AM Jazz left unfinished business - and, with 50 or so session recordings leaving a litter of sonic debris strewn about the cutting room floor, one major clean-up. Deep Blue View is 6 brand new tracks crafted from its reconstructed and revived remnants, unfurling like Sinatra’s Wee Small Hours to reinforce the strangely beautiful atmosphere of Al’s now revered repertoire.

“I had the urge to create something new and started playing around with different EPs and pseudonyms but when I sequenced these tracks, I was really happy how smoothly they flowed; it just needed an opener. I quickly wrote ‘Deep Blue View’ and it fell into place. It’s great, so I carried on, knowing it was time to save the best stuff for myself,” Al grins.

Just as AM Jazz was created in the spirit of his earlier working style on debut album Tower of Love, Deep Blue View fuses Al’s love of finding the ‘right’ in the odd, weird, back-to-front and everything in between, with the hi-fi meets lo-fi sounds of his crate-digging curiosity and empathy for TV themes and movie soundtracks. Guided by melody, his home-based sorcery of working with analog, tape and field recordings opposed to the lure of studio mechanics allowed his inner subconscious to tap at the door and reveal itself in new musical forms. “In the studio it’s tempting to turn everything up loud but I’ve got bad tinnitus and don’t want to write anything else in a Beatles style. I have done all that now… at home I have a computer, a microphone and just go crazy and lose myself staring at the screen. Then suddenly loads of music is written.”

Setting his inner autopilot to flight mode, ‘Peppergone’ adds to the tracks’ nocturnal narrative and appears reborn after a last-minute culling from AM Jazz’s initial tracklist. Like a beautifully romantic ode to Beethoven’s Moonlight Sonata, it is a fitting tribute to dearly departed best friend 'Batfinks', written in the middle of a tough night. “I have no idea why or how the song came about because I was so upset to do anything, let alone record any music. But there you go. Somehow I did and it’s a really special thing. I know he would have dug me using his chords; growing up we’d both try to create the perfect chord sequence. This is his idea of that. I hope he doesn’t think it’s shit,” Al jests.

Also revived from AM Jazz’s archive is the simmering groove of ‘Night Talk Late Street’ and instrumental ‘Star Six Seven’, whilst ‘Have Another Cigar’ weaves its own semi-autobiographical fairy-tale with lyrics written and sung by long-time pal and former housemate Aidan Smith. Transformed from backing track into a cool morsel of story pop, it recalls the drunken joy of when the pair would make recordings together between singing the Everly Brothers at full volume. “I’m sure it’s about not wanting the musical party to stop and having to get on with real life,” Al says.

‘String Beat’ meanwhile, soars like a beautiful Bond theme with the shimmer of Lee Hazlewood holidaying in Palm Springs, alongside perhaps, the waltzing string-like synthonies of some long-lost rhythm and blues orchestra of Davyhulme (whose real-life origins reside with the Berlin Symphony Orchestra), introduced to him by Super Furry Animals’ Cian Ciaran. “I’ve never created anything this moody before and have always threatened to do something John Barry-esque with some slightly dark and spooky musical changes.”

First may not be worst, but as AM Jazz has proven, second can be best and as a master of suspense Jim’s Deep Blue View arranges the day to night pieces of another puzzle that makes a whole lot of sense.

Andy says: Another absolutely beautiful record. Gonna be one of my favourites of the year, I can tell already.